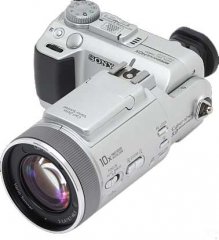 About a week ago my Sony camera went on the blink. Up until that point I was very happy with the camera. When I looked through the view finder I got garish yellowish-green monochrome image. When the image started to smear across the screen I decided that it needed to be fixed or trashed. After searching the net for some ideas on how to fix it, I came across a post that said that Sony had settled a legal case concerning a variety of cameras and they were fixing the cameras as part of the settlement. He said that although his camera’s symptoms were not the same as shown on the Sony support website, when he talked to the folks at Sony they said they were willing to fix it under the settlement. So I gave them a call and they offered to fix my camera, too. Yesterday I got my camera back and it works. I am a happy camper again.