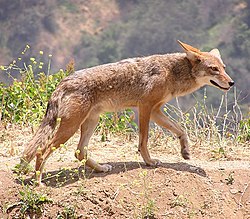 Several years ago a neighbor said one of her horses had been attacked by a pack of coyotes. We were concerned since we had young horses. Coyotes do not normally hunt in packs. We looked and looked but we never saw the coyotes. Occasionally we would hear them at night. They have a distinctive sound and it can sound pretty eerie when you are alone in the country at night. Last week I saw two coyotes near our lake. They looked like the picture but a little grayer. I was returning home after dropping off my son at school. It was a clear, cold winter morning and the ground was covered with an inch of crusty now. The pair were checking out the lake. The lake was frozen over and the geese had left several days ago. I guess the coyotes were hungry and hoping to get lucky.  My presence startled them. They jogged off with a sly smile on their face. I was intruding on them. I was surprised to see them since we have two Great Pyrenees dogs. The dogs hang out at the barn but the lake is only a hundred yards away. The lake is was well within the dogs territory and the dogs have not been shy about chasing off dogs encroaching on their territory. These are farm dogs who have lived outside and roamed free their entire lives. Our female dog regularly catches possums and raccoons during the warmer months. It would appear that the dogs and the coyotes should have a territory conflict. Coyotes and Great Pyrenees are reported to not get along. I suspect this will be the last time I see these two. In a couple of weeks these coyotes should find enough food outside of our dogs territory and they will not take this risk again.